Warning: A non-numeric value encountered in /home/customer/www/simplyrdfoodie.com/public_html/wp-content/plugins/matcha/card.php on line 139


Saturdays when I was living at home meant big breakfasts of pancakes, french toast, or eggs. Served on my absolute favorite blue plates, of course.

Now that I am living on my own, these big Saturday breakfasts have fallen to the wayside. Because who wants to make a big batch of pancakes all for themselves? It is so much easier to grab a bowl of cereal or some PB toast and head out to run some errands.

But this past weekend, I decided to indulge myself and whip up a decadent brunch after I successfully went food shopping in the city… without using a car! (big first for me!)

And my big reward was the most decadent breakfast I have made to date.

Pieces of banana bread are soaked in a boozy egg mixture and then griddled until crisp and golden.

Basically everything I have ever wanted in a breakfast ever.

This recipe is inspired by my two aunts – C and M. My Aunt C ordered banana bread french toast and I was totally intrigued by the concept. And then my Aunt M supplied the delicious banana bread (which was yummy and dense and flavorful!). So thanks, guys – you helped make my brunch dreams a reality.

And this dish couldn’t be easier to make!

It starts with grabbing a pan to cook the french toast. I cooked mine in a cast iron skillet, but a griddle or non-stick pan works here too!

Heat your skillet over medium to low heat.

While that’s heating, make the egg mixture. It just eggs (one egg per serving of toast), skim milk, cinnamon, nutmeg… oh and a healthy splash of bourbon. Because this is Saturday brunch and you deserve a little indulgence.

Staler and/or dry banana bread works better for the french toast because it soaks up more of the egg custard. If your banana bread is pretty fresh (or super moist), you can toast it lightly on the preheating pan to dry it a bit (or pop it into a 350 degree oven to dry it out).

When you have your banana bread to the appropriate moisture level, soak the bread for about a minute a side in the egg custard.

When you’re ready to cook, add a bit of butter to the skillet and allow it to melt.

Because you cannot rush french toast (it’s against the laws of breakfast!).

When the first side is golden and delicious, flip and continue to cook until the second side is also golden and crisp.

If you don’t have a large skillet or griddle (or want to feed a bunch of people), keep the cooked french toast on a baking rack in a low oven to keep warm/stay crisp while you continue to make more.

When you’re ready to eat, pile some of the french toast on a plate (with extra bananas of course!) and cover in syrup. Caramel sauce and chocolate chips would not stink either!

It was a great way to continue to celebrate my favorite Sunday tradition (I even got some blue plates for the occasion!)

From Simply A (RD) Foodie at http://simplyrdfoodie.com/bourbon-banana-bread-french-toast/ 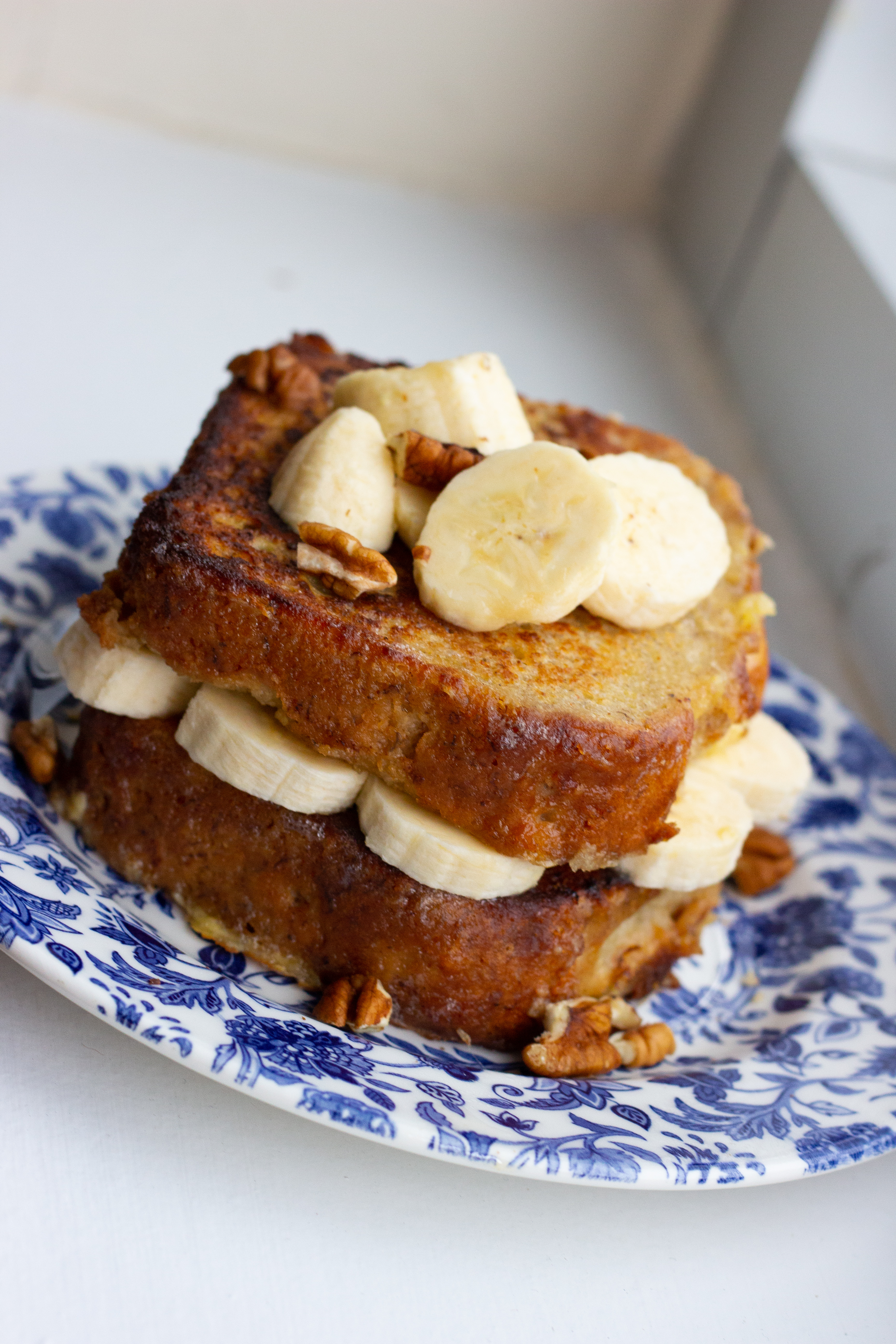 A twist on the breakfast staple!

Generated with ♥︎ by Matcha Print