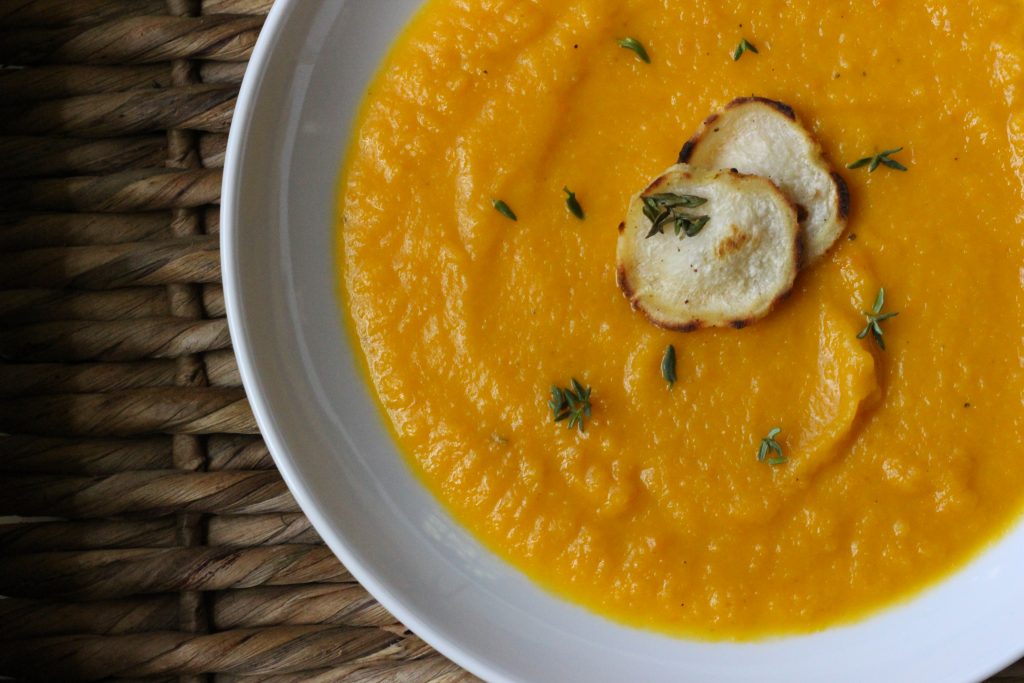 One summer many years ago, a big supermarket chain opened up near us and we of course went to check it out. They had a huge prepared food section, so we decided grabbed a quart of soup and a fresh baguette for lunch that day. The soup was carrot ginger and it became my absolute favorite soup of all time.

And the #1 thing I love about it is that it’s so easy to make. It literally chop/dump/stir/simmer/puree. Oh, and it makes your house smell like a fall wonderland.

And who does not want their house to smell like a fall wonderland?

So when the weather became a little cooler a couple weeks ago and I found a bunch of fresh carrots at the farmer’s market, I knew it was a sign to make soup.

And it was awesome.

While this soup is called Carrot Ginger, there is actually another secret vegetable that I add to create better body and smoothness. 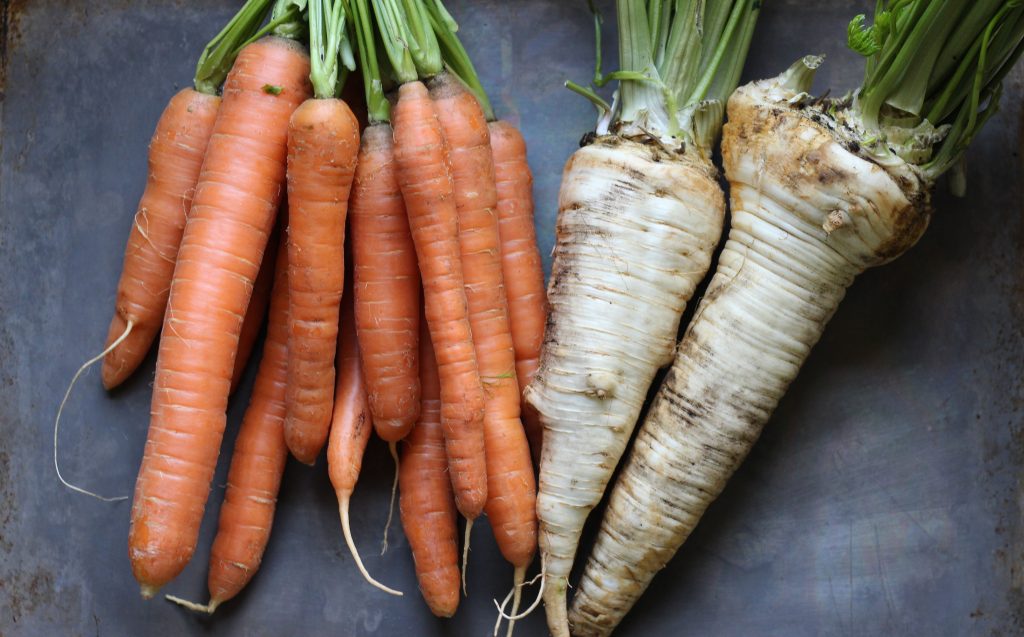 They are super mild in flavor, but add great bulk and depth to the soup. Plus, they look super cool! (also, can we marvel at how big these ones were from the farmer’s market?!)

I peeled, washed, and coarsely chopped up some carrots and parsnip and then set them said to start the soup base. 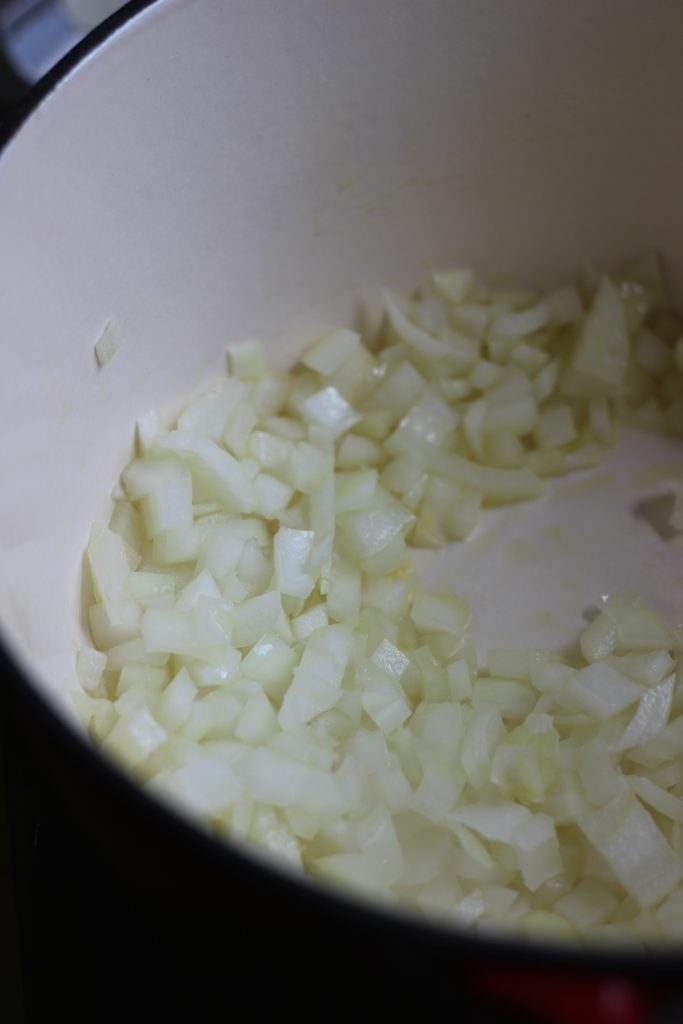 In a large pot (this enameled dutch oven from PW is my fav!) set over medium heat, I added in some olive oil. When the oil was hot, I added in some diced onion and cooked it until it was golden and soft and there were those delicious brown bits on the bottom. 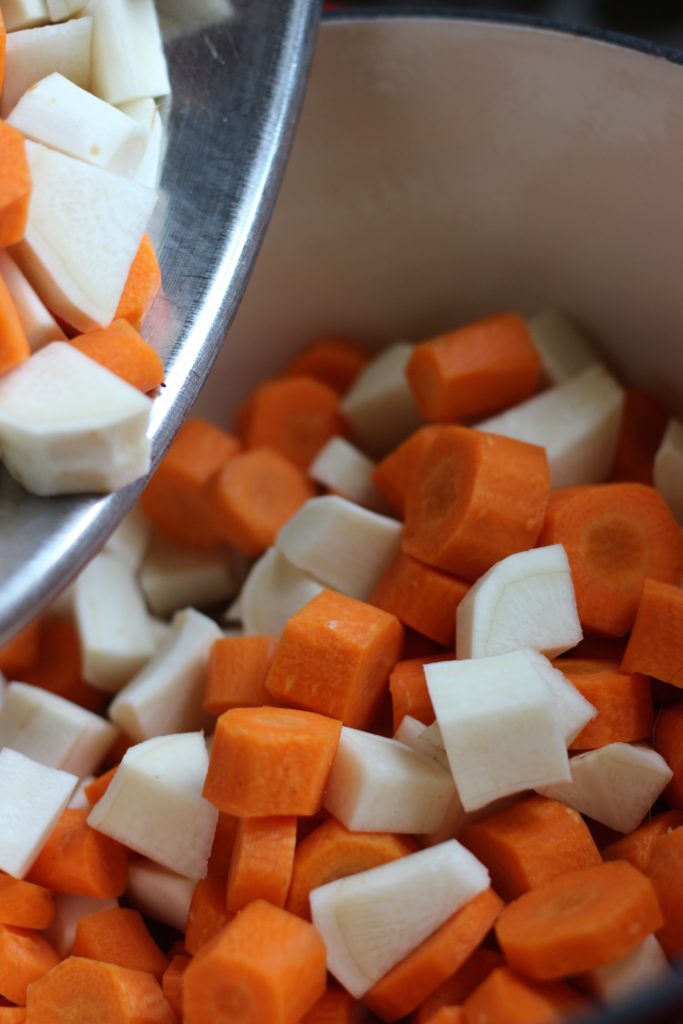 Dump the chopped up carrots and parsnips into the pot and stir for a minute or two to allow the veggies to brown up a bit. 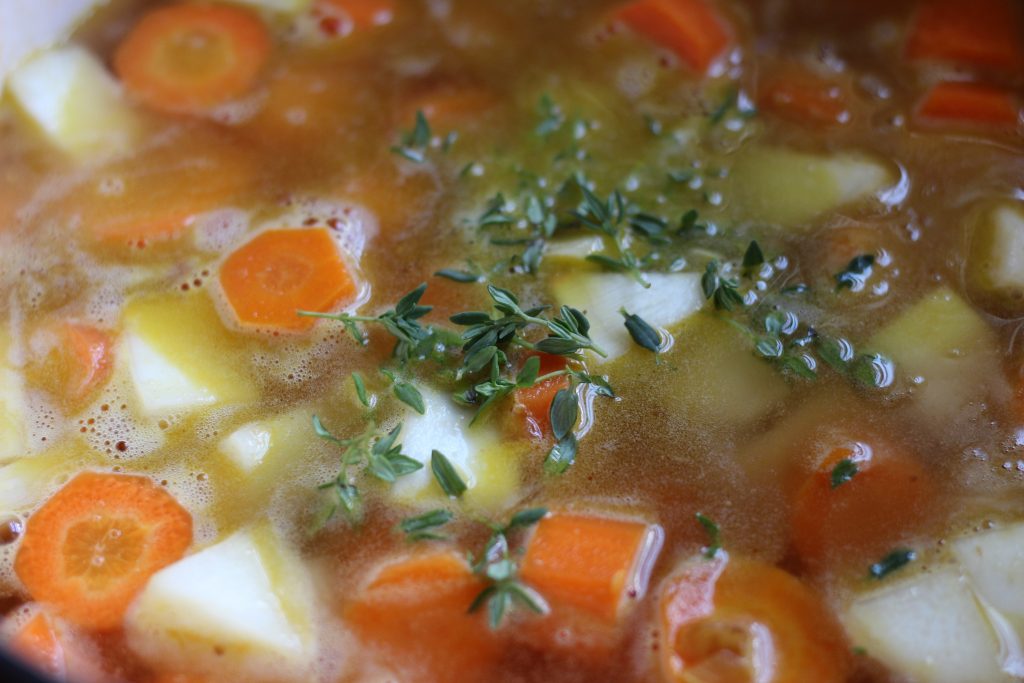 Bring the whole thing to a boil, reduce to a simmer, and cook the soup until the veggies are fork tender. 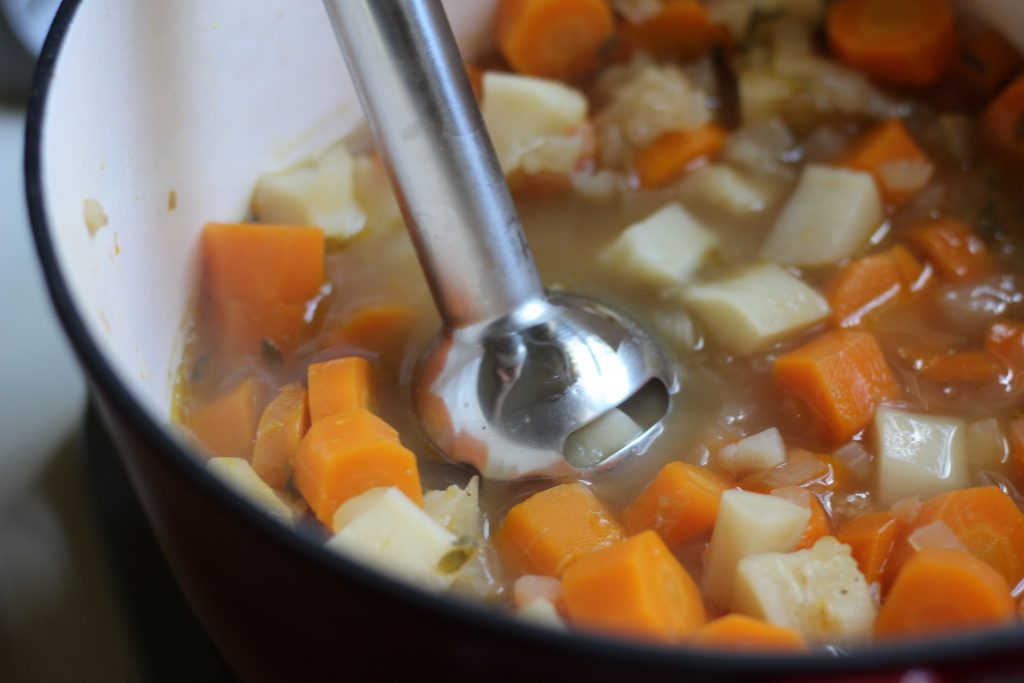 Now comes the slightly dangerous part… the blending. If you have an immersion blender, you can puree the soup right in the pot and be done with it. If you don’t, grab your blender or your food processor. Working in small batches (either filling only half the blender or filling to only the max liquid line of a food processor), puree the soup until smooth. Transfer the pureed soup to a big bowl so you can reuse the soup pot – it makes it a little easier! 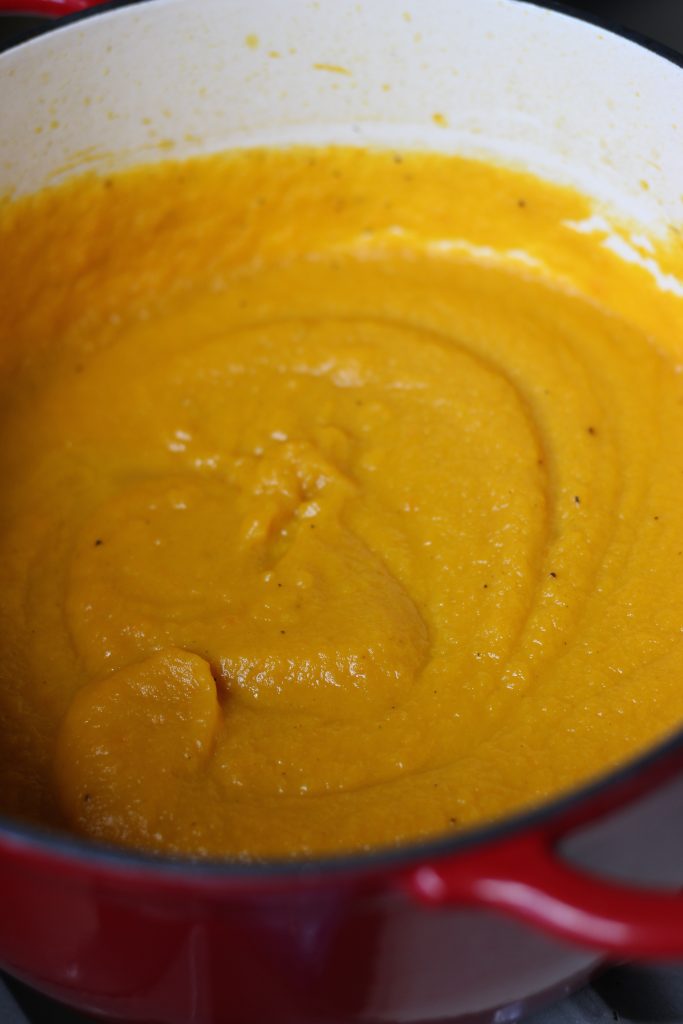 Taste the soup and adjust the seasoning as necessary – sometimes I think I need to add more ginger because sometimes its flavor gets a little lost in the cooking process.

Then it’s time to dig in! 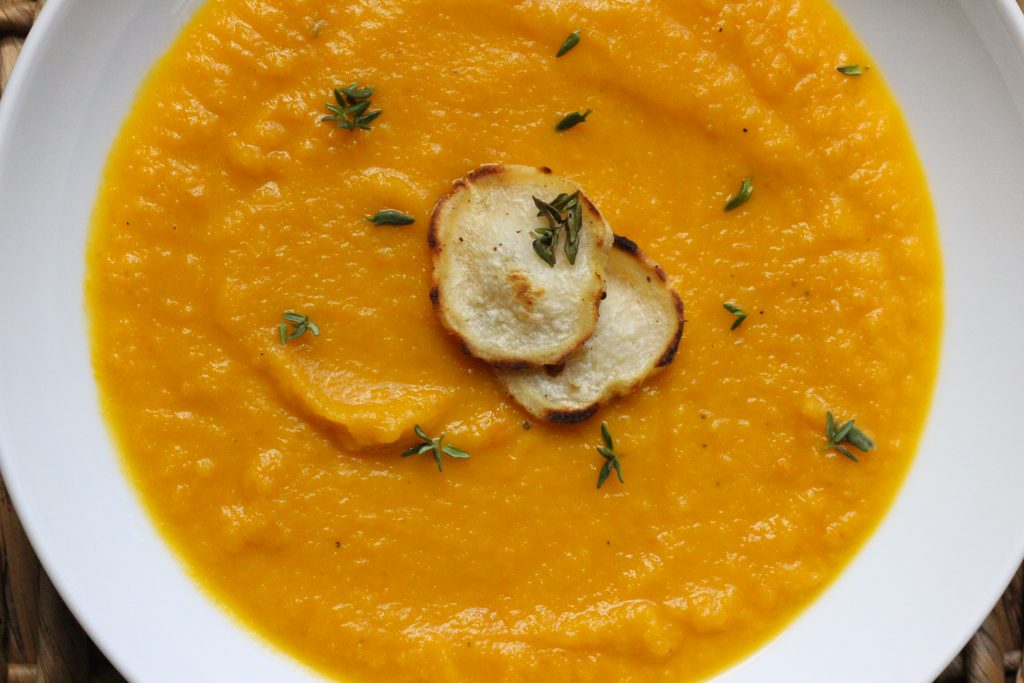 I ladled it into a bowl and topped it with crisp parsnip chips and fresh thyme. A healthy, fall soup that is ready for dinner in under an hour! 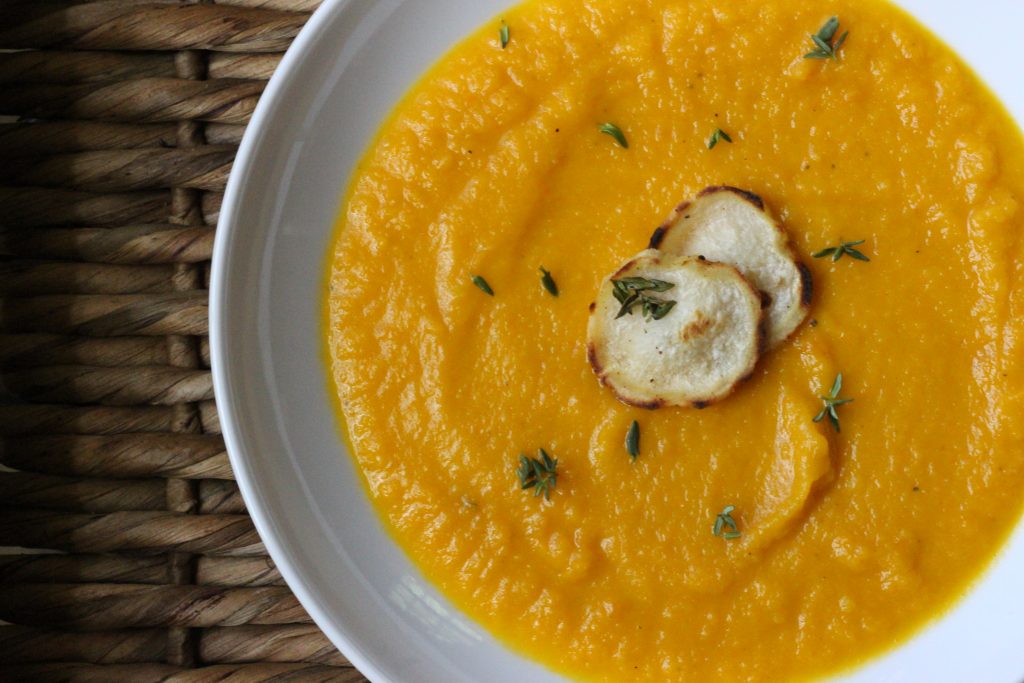