How’s it going? How was your 4th of July? Did you have a great weekend with your family and friends?

I had a wonderful holiday full of family and good friends. E came home to celebrate, her godparents stopped for a visit as they were driving home from vacation, and we had two good friends come for dinner/dessert/fireworks. That’s exactly how I like my Independence Day celebrations – friends, family, food, and fireworks.

While dinner was all about the traditional cookout food, we decided to rebel and not serve pie for dessert (gasp!). I saw a really cool concept for a layer cake in Instyle Magazine and I had to try it out.

It starts with boxed cake mix – one box on red velvet and one box of white vanilla cake (not the yellow cake, the actual box that says “white”, or else the colors will get wonky).

I made the red velvet cake according to the package in two eight-inch pans that were sprayed with cooking spray and lined with parchment paper (for easy cake removal). For the white cake, I prepared the batter according to the directions and pour half of the batter into a sprayed and parchment-papered eight-inch cake pan. With the second half, add some blue gel food coloring into the batter until you reach the perfect shade of blue (this is about a third of a 1oz jar of food coloring).

Now, it’s all about the assembly. I cut the perfectly risen vanilla layer in half, so I had two vanilla layers. Since my red velvet cake and blue cake layers didn’t rise very much (!), I ended up having less layers in the cake than the Instyle cake. But it all worked out fine!

Spread on a thin layer of vanilla icing… and yes, I am using icing from a can (two and a half cans of the stuff in total).

Then place a vanilla layer and add another thin layer of icing… and yes, I forgot to take a photo of these steps.

Then plunk another red velvet cake layer onto the growing cake stack and add more icing. 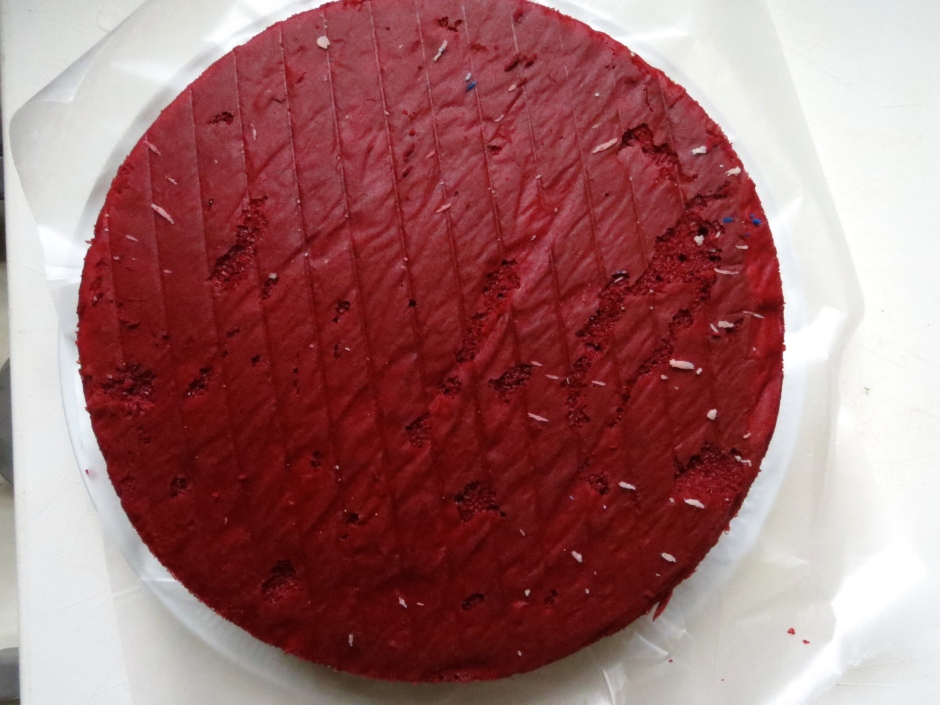 Place the blue ring layer on top of the cake.

Then grab the second vanilla layer and cut out a four-inch circle. Pop the circle into the middle of the blue ring.

All that’s left is to frost the cake!

I usually pile a bunch of icing on the top of the cake and push it to the edges and let it fall over the sides. Then it’s easy to spread the frosting on the sides.

It’s important to pop the cake in the fridge for a little bit to let the frosting set up.

Then cut into it and show off your American pride!

Grab this recipe from Instyle Magazine’s website at http://www.instyle.com/news/fourth-of-july-flag-cake-recipe-video!