As you have learned from the past few weeks of blog posts, I love fall. From the changing leaves to the pumpkins everywhere to the seasonal foods, fall is definitely my favorite season.

One of my favorite fall traditions is going with my family to a local farm to buy apples, look at all the different pumpkins and gourds, and dig into fresh apple cider donuts. A relaxing day spent with the people I love… and cider donuts.

Apple cider donuts are an interesting food. They are soft, cake-like, and spiced on the inside with a firm outer crust that is covered in sweet sanding sugar… basically the perfect balance of textures and flavors. I love apple cider donuts so much that I actually had them instead of cake for my 6th birthday!

The apple farm is usually swamped on weekends, so apple cider donuts have been hard to come by this season. But when my mom showed me a recipe that she saw on Facebook for APPLE CIDER DONUT CAKE, I was sold. We had to make it and we had to make it now.

With a few tweaks, I think we made a pretty delicious cake. There are a couple stages of ingredients and steps, but the results are definitely worth it.

It starts with the dry ingredients.

In a large bowl, I combined flour, baking powder, baking soda, salt, cinnamon, nutmeg, and allspice. Then set the bowl aside as I got the wet ingredients together.

The first component of the wet ingredients is an apple puree that is made from boiling cubes of apple in apple cider until they are soft and tender.

Any firm apple works here – I personally like granny smith or gala apples the best!
When the apples are tender, let the mixture cool slightly before transferring it to a blender or food processor. NOTE: when blending a hot liquid, only fill the blender up halfway and crack the top open and cover with a tea towel. This will prevent the top from flying off and hot apples going everywhere.

Puree until completely smooth. Pour out one cup of the apple puree mixture – if there is not enough apple puree, add in some more apple cider to make up the difference. Then add in a ¼ cup skim milk – stir to combine and then set aside.

Now it’s time to bring out the big guns… your stand mixer!

In the bowl of your stand mixer, combine some butter (okay, one stick), some granulated sugar, and some brown sugar. Beat until fluffy.

Then slowly add in three eggs, some vegetable oil, and some vanilla bean paste or vanilla extract and stir until combine. Then, with the mixer on low, add in the dry ingredients alternatively with the apple puree – starting and ending with the dry ingredients. Mix until just combined. I recommend using a spatula to do one last mix to combine anything that is stuck on the bottom of the bowl.

Pour the batter into a bundt pan, preferably one without a fancy pattern – this is a donut, after all! Bake the cake for 35-40 minutes until it is golden brown and a toothpick inserted inside comes out clean.

While the cake is baking, you can whip up the two “toppings” for the cake – a glaze and a cinnamon sugar sprinkle.

For the glaze, heat butter, sugar, and water in a small saucepan over medium heat. When the mixture comes to a boil, let it cook for 1-2 minutes. Remove the syrup from the heat and add in some…

… whiskey! Apples and whiskey (just like bananas and whiskey) go together really well. If you don’t like whiskey, you can substitute some apple cider instead. Then set the glaze aside until the cake is done.

Now, all that’s left is to make the cinnamon sugar.

In a jar with a tight-fitting lid, combine sugar, cinnamon, and nutmeg. Screw on the lid and shake vigorously until combined.

When the cake is done, cool it for a few minutes in the bundt pan then turn it out onto a cooling rack set over a wax paper-lined baking sheet. Let the cake cool slightly.

When the cake has cooled, start to brush the cake with the whiskey syrup. I do this in several stages to allow for maximum syrup soakage.

Now it’s time to dig in!

Not quite the same thing as a cider donut, but delicious nonetheless… A perfect homage to a childhood favorite!

So, kiddos, do you like cider donuts? What’s your favorite fall food? Let me know! 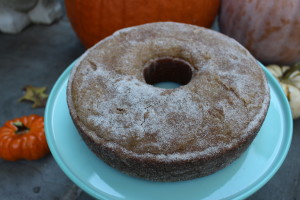