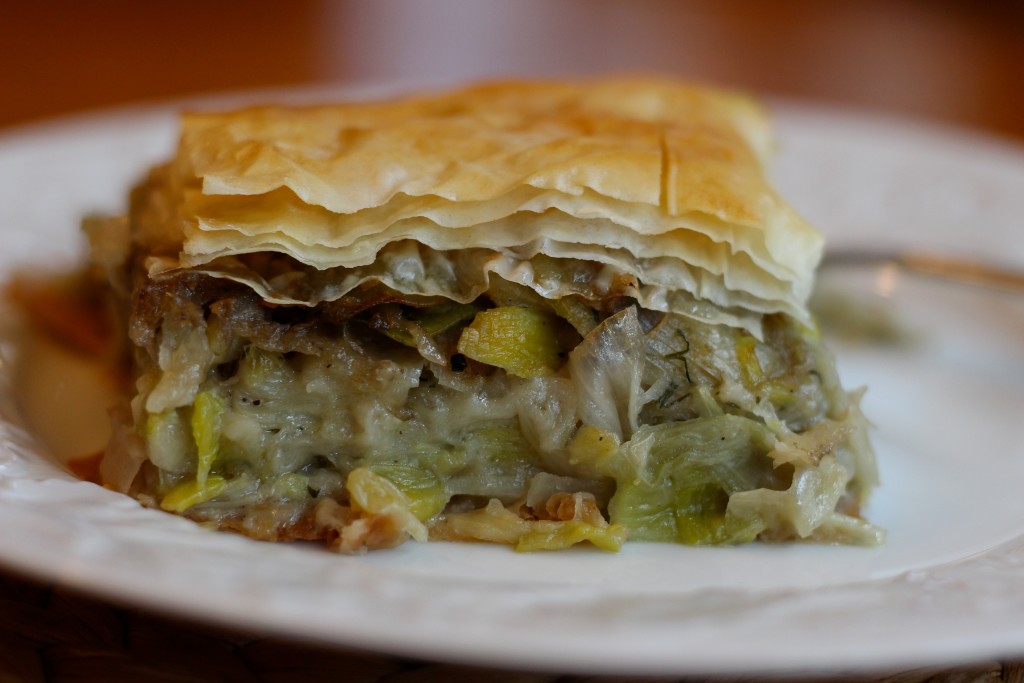 Leeks are my new jam.

I think my obsession with leeks started when I found the world’s largest leeks at the farmer’s market in the fall. The leeks were about 2 feet long and weighed about 2 pounds each. And I was able to buy a bundle of three for a dollar. SOLD!

We ate one of the leeks as a side for dinner that night and then my mom graciously cleaned the remaining two leeks and left them in the fridge for us to figure out something to do with them. Since is was a lot of leeks (4 pounds worth!), I ended up sautéing the leeks up in a little olive oil with salt and pepper and freezing them into two two-pound portions. The leeks stayed in my fridge until The YIA took one of the packages of leeks and made the traditional Greek spinach pie (spanakopita) with them and it was divine. Which made me want to use up those leftover leeks sitting in my freezer. But I realized I had no idea what to make with them.

Then I remembered a family trip to Greece in high school. Pies (or pitas) came in every kind of shape, type, and size. While I did gorge myself on spanakopita, I remember also enjoying an all-leek version called prasopita (literally “green pie”).

My flashback was fate.

I decided that I was going to make prasopita with my leeks.

It starts with making the filling for the prasopita. 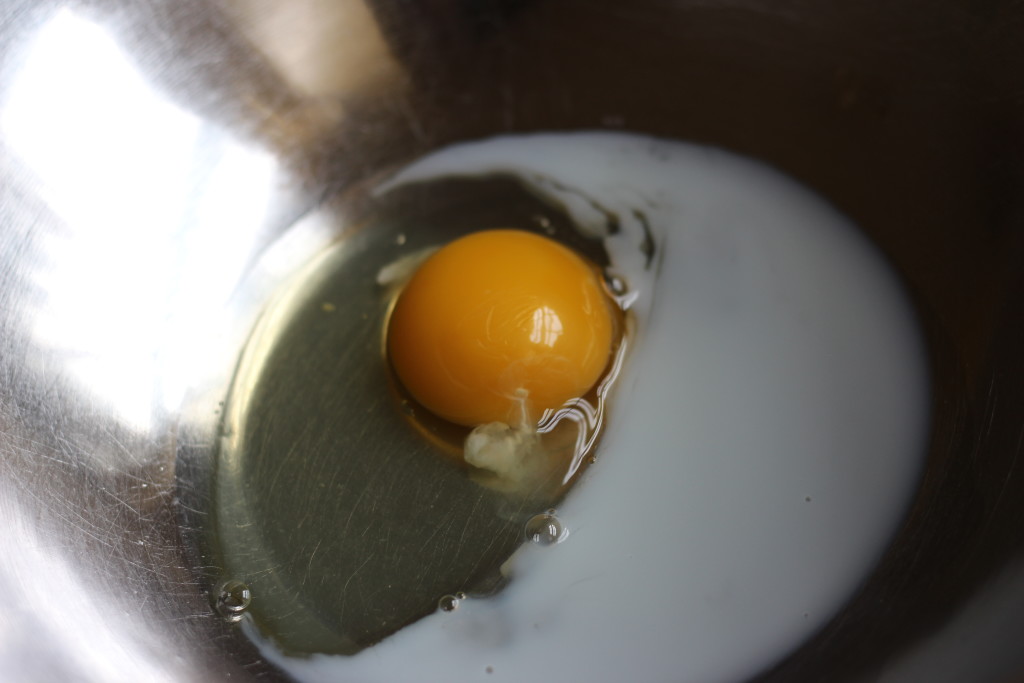 In a large bowl, combine an egg with some skim milk. Beat them together to just combine them. 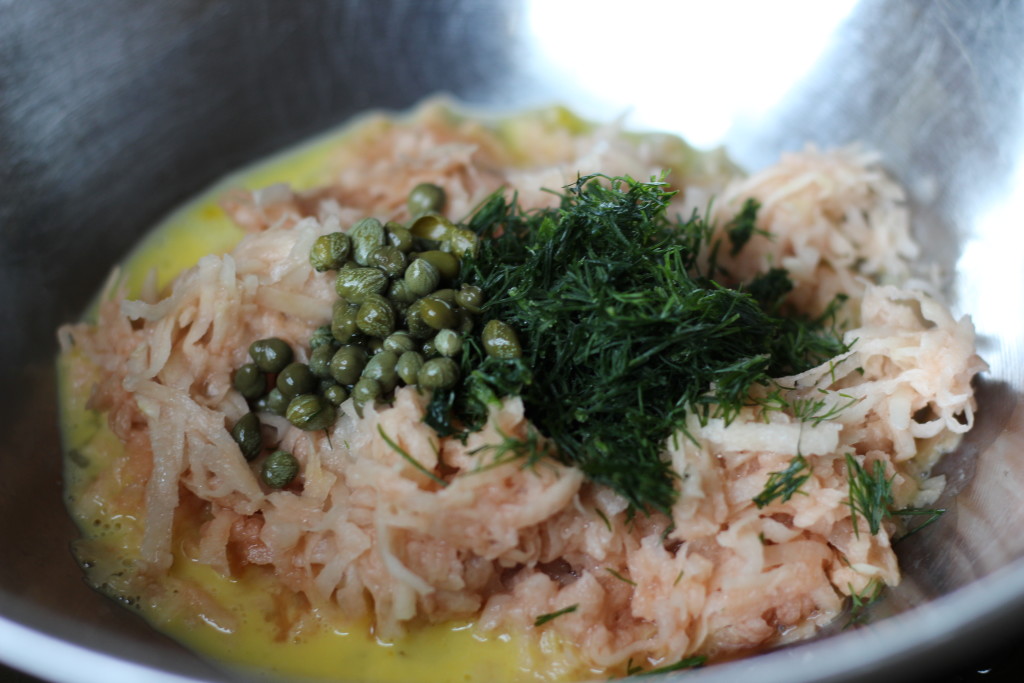 Then add in some grated potato, some fresh dill, drained capers, salt, pepper, and cayenne pepper. 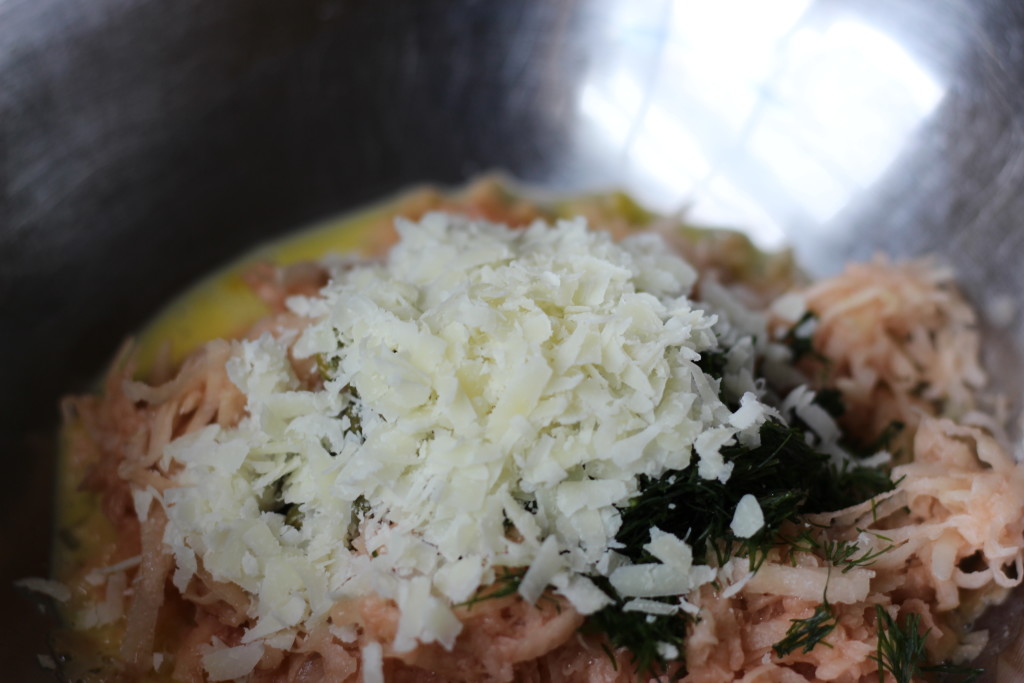 And some parmesan cheese! Stir everything together to combine. 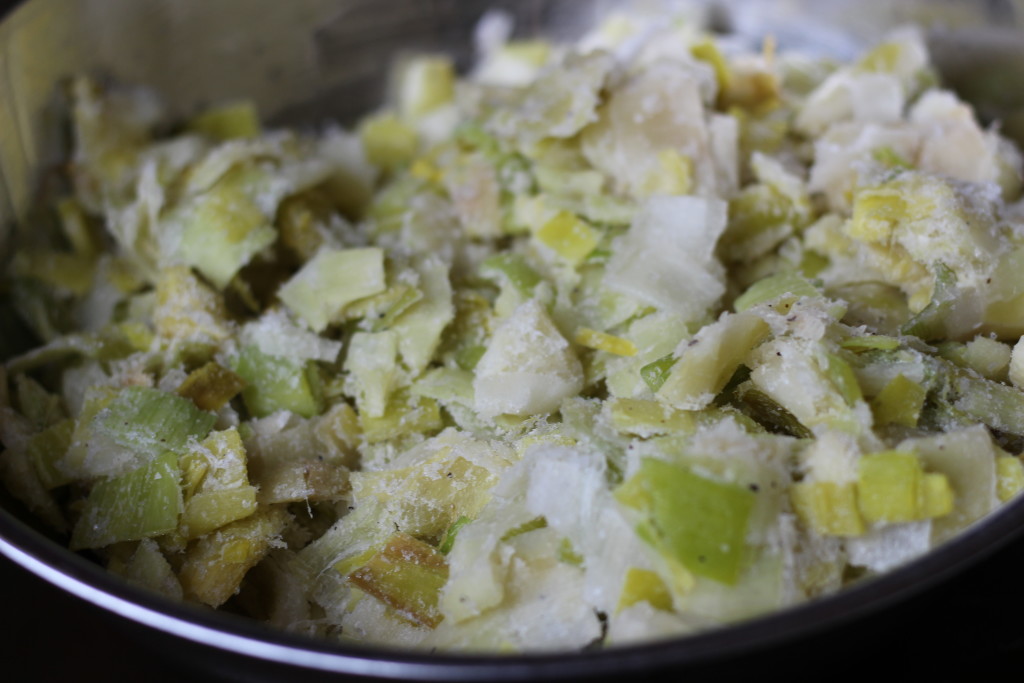 Then add in the star of the show! The leeks! This is about 2 pounds of chopped leeks that have been sautéed in 2 tablespoons of olive oil with salt and pepper to taste. I cooled the leeks in the fridge and then put it into a ziptop baggie, smooshed the leeks flat and froze them (they’ve been hanging out since November). I thawed them out in the fridge for a couple hours (flat freezing = speedy thawing) and then tossed them into the bowl. 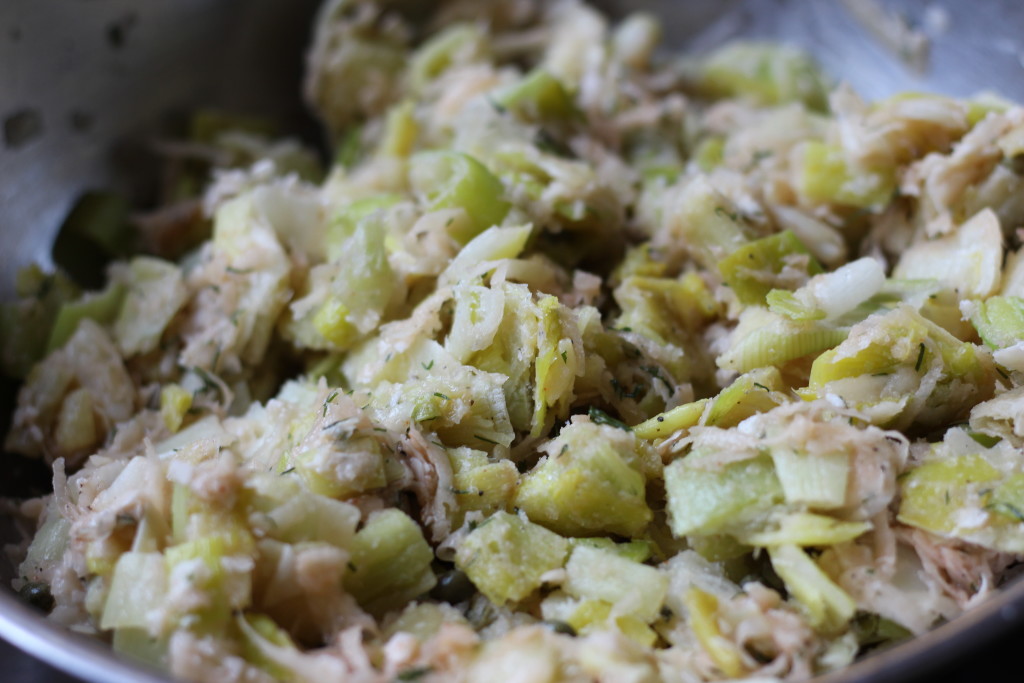 I stirred everything together and set it aside to prep the phyllo dough. 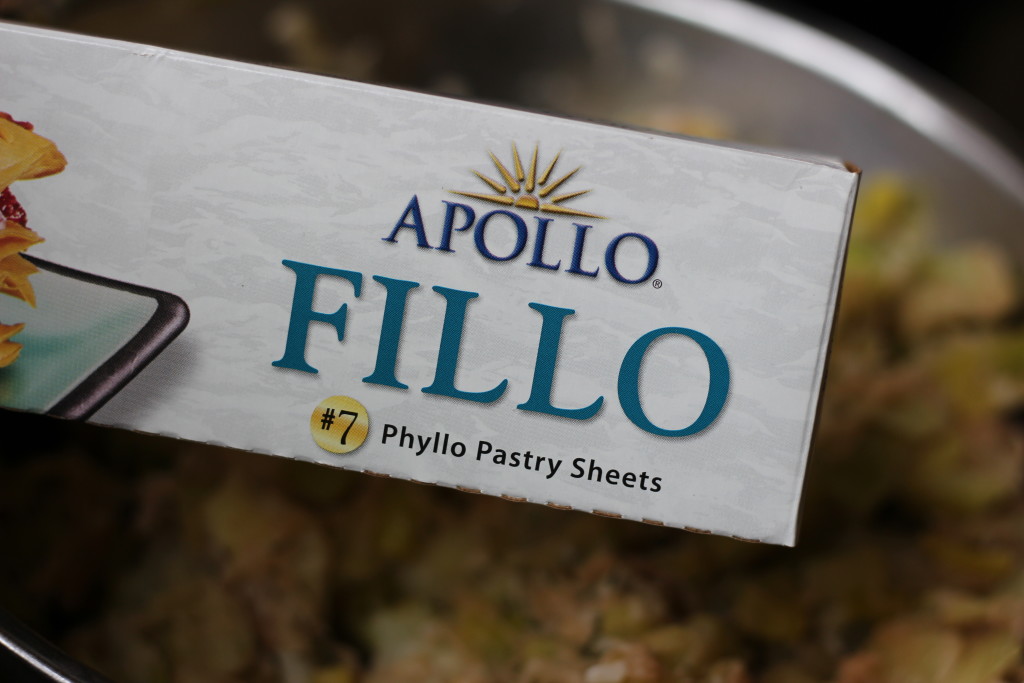 A note about phyllo. It is incredibly delicious and is not that hard to work with after you get the hang of it, but it can be a bit finicky. It dries out super quickly, so as long as you keep moving and keep the sheets covered with a damp tea towel, you should be good to go!

I am using a 9×13-inch baking dish so I cut the phyllo sheets in half width-wise so the phyllo will just fit into the baking dish. 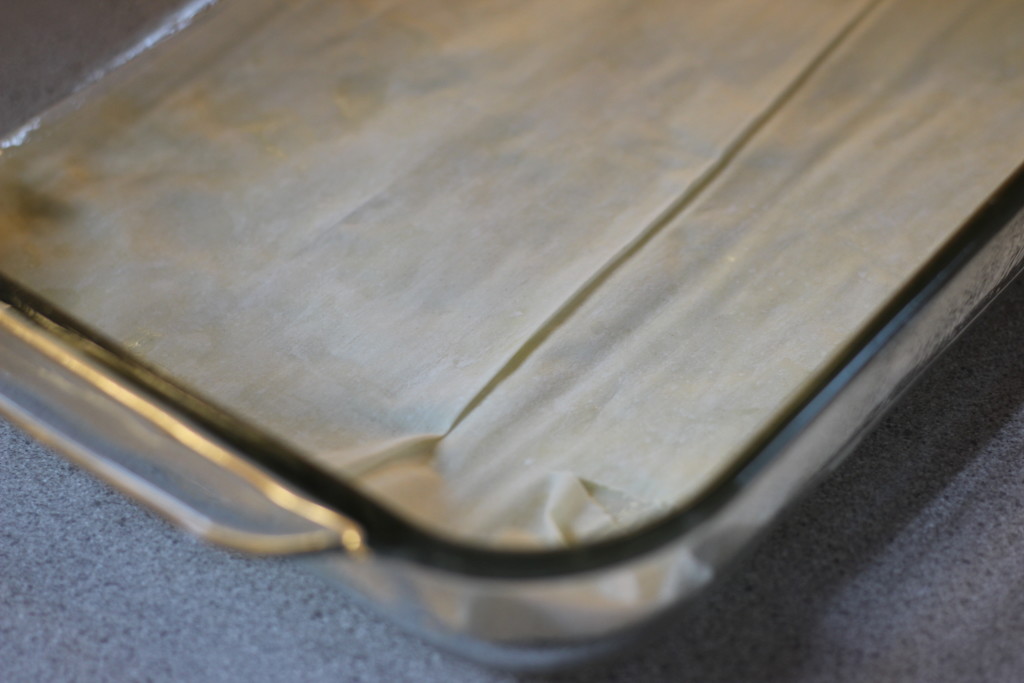 To layer the prasopita, start by buttering one sheet of phyllo dough then placing another piece on top until you have a stack of 5 sheets of butter phyllo dough. Place the stack of sheets the bottom of the lightly greased baking sheet. 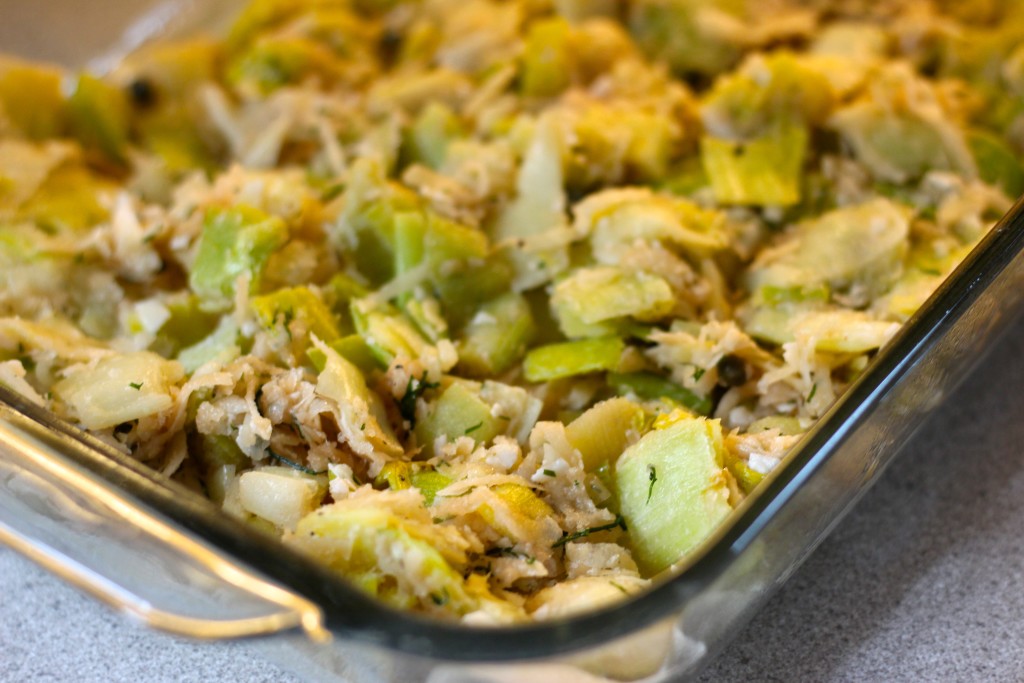 Then layer on half of the leek filling. 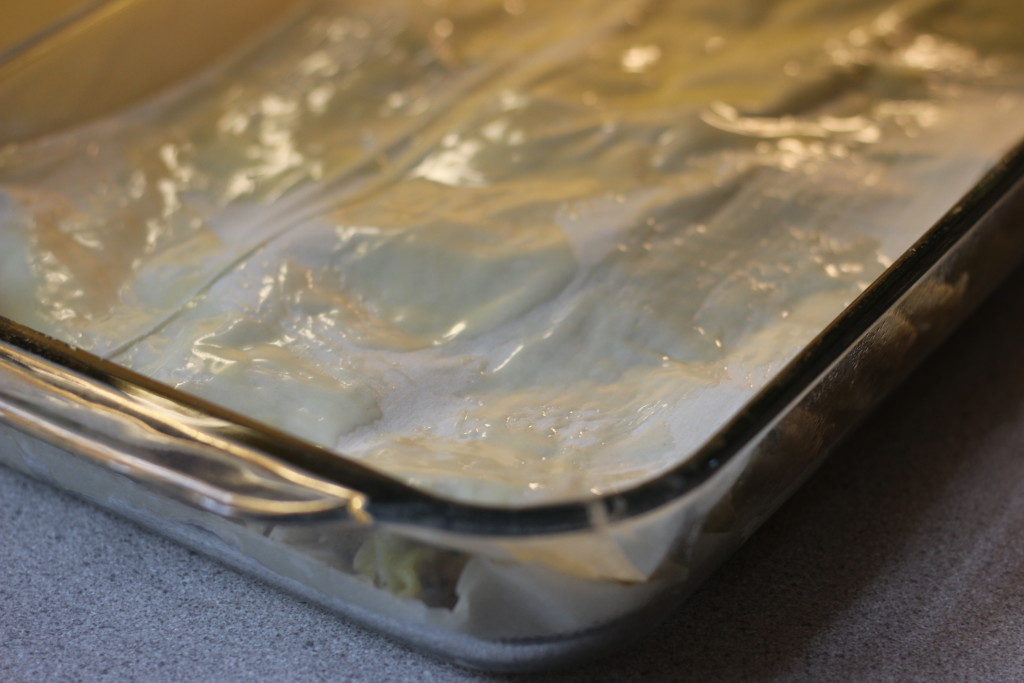 Top the filling with another stack of five phyllo sheets (using the same method of buttering one sheet, placing another sheet on top, buttering that sheet, etc.). 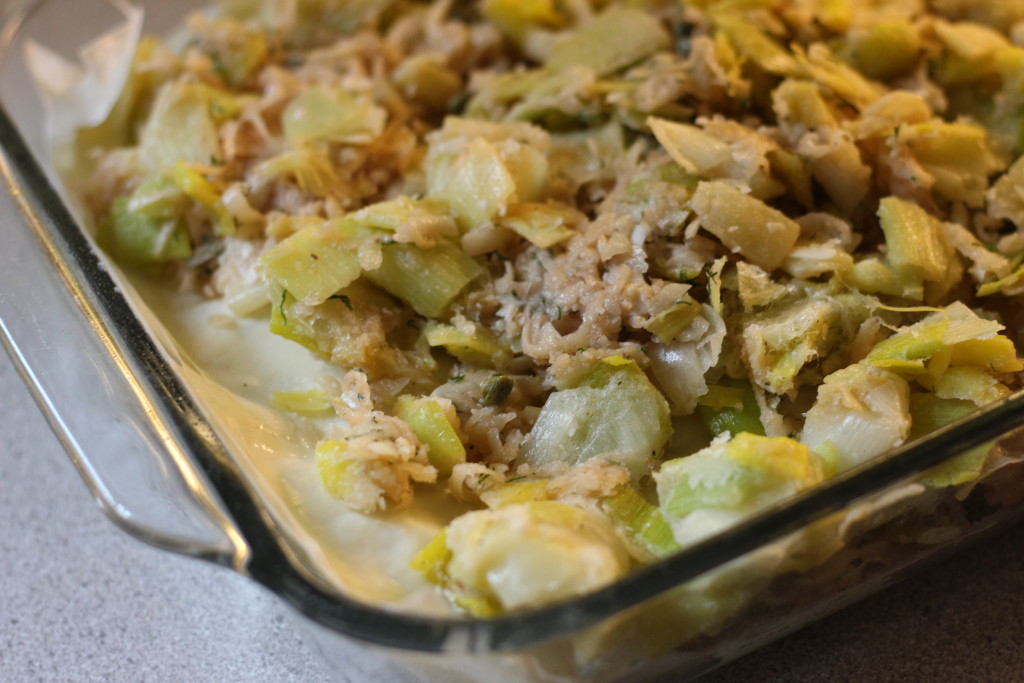 Then add the other half of the filling. And then add other stack of five phyllo sheets. 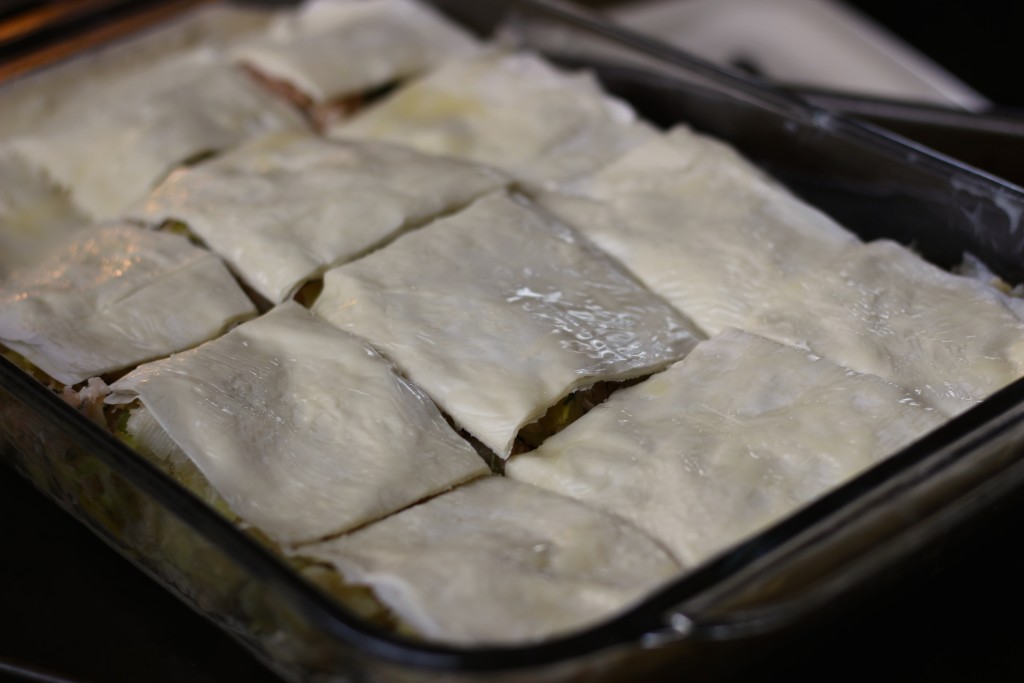 Now we need to score the prasopita so it is easier to cut after it’s done baking! Scoring is when you pre-cut the prasopita with a sharp knife – we cut ours into 12 pieces but you can make them as large or as small as you want!

The pop the prasopita into a 350 degree oven and for an hour and fifteen minutes until it is golden brown and delicious! 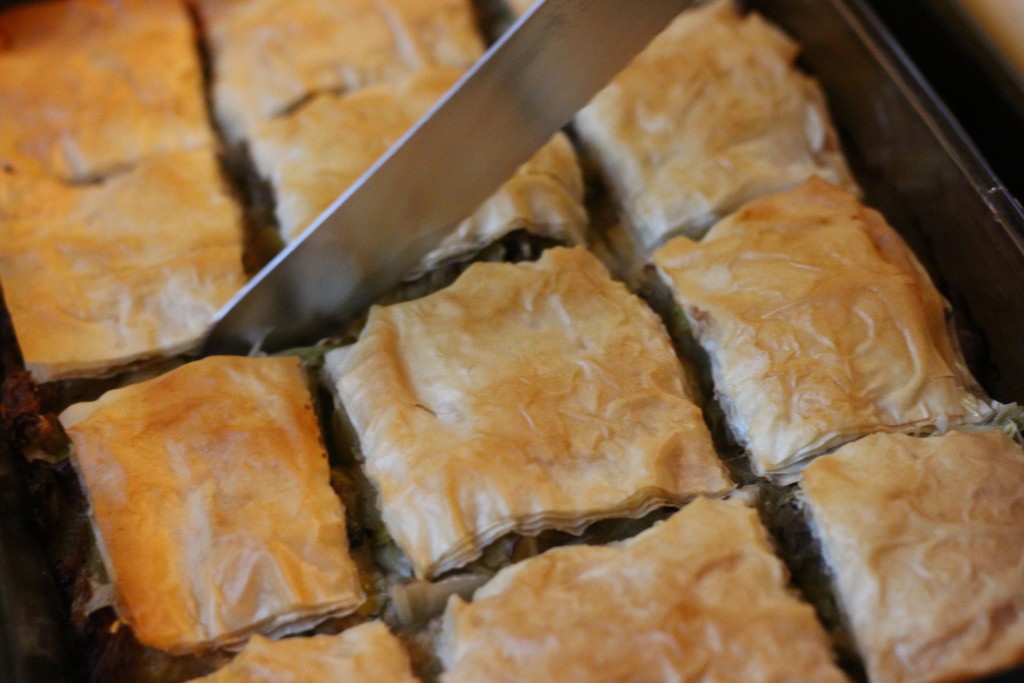 Serve it up and dig in! 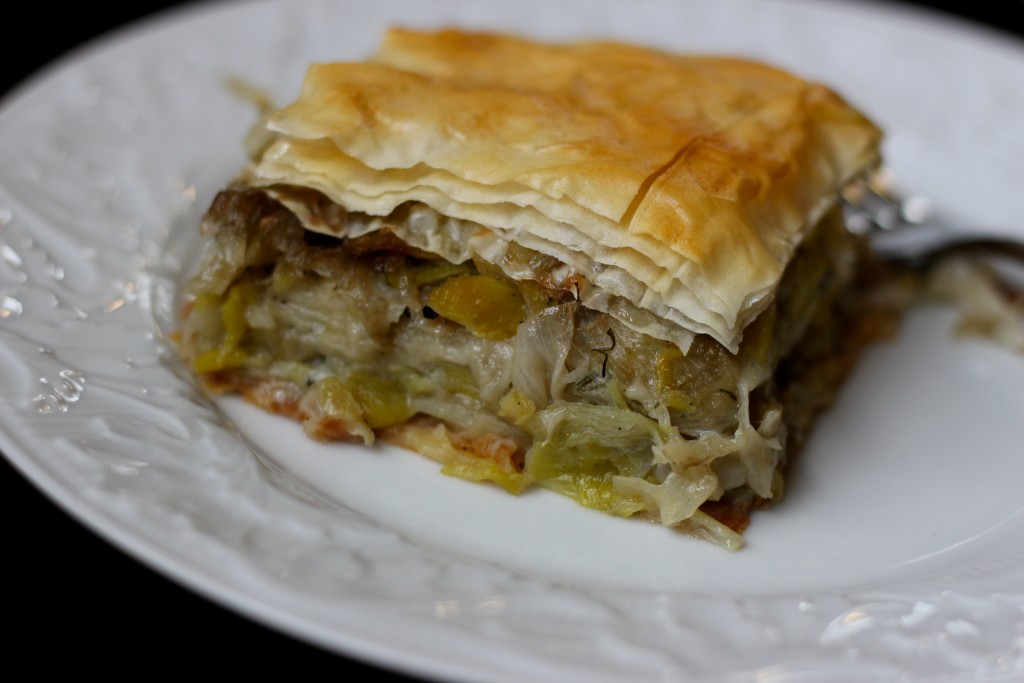 Leeks for the win!