We are now five days into Hunger Action Month and it has really made me think about all the different ways we can reach out and fight hunger in our communities.

Food pantries are one way that communities can support our neighbors in need, but it’s another food outreach program that has captured my heart… Meals On Wheels (MOW).

Meals On Wheels is a nationwide organization that provides meals to homebound seniors to help them remain independent and stay in the comfort of their own homes for as long as possible. Caring volunteers not only provide a nutritious meal, but also a friendly visit (and conduct a much needed safety check). It is a great organization that is staffed by great people who are passionate about taking care of their neighbors.

During graduate school, I was fortunate enough to have the opportunity to volunteer at the local Meals On Wheels program. This program was housed in the basement kitchen of a public housing complex, which allowed them to cook all the food they served their MOW clients. It was my first experience in a restaurant-grade kitchen and my first experience working with massive quantities of food. It was AMAZING.

My friends and I were tasked with assembling meal trays for delivery and dividing large batches of salads, desserts, and rolls into single-serve portions (not much cooking) and it really made us focus on our food service and food safety skills. Our reward after a long morning of serving up food was being able try the leftovers on the hot food line. My absolute favorite hot item that they made there was eggplant parmesan. But this was not just any eggplant parmesan… it was eggplant parmesan rounds.

What I love about this version of eggplant parm is that it is super simple (and breading-free), allowing the eggplant to really stand out and shine – the way eggplant parm should be (in my opinion). I never got the official recipe, but this recipe is the closest to that eggplant parm I ate during graduate school at Meals On Wheels.

It all starts with an eggplant that’s been sliced in ½ inch slices.

Then placed in a colander and salted with some kosher salt – this step seems unnecessary but it really helps the eggplant have a better texture and removes some of the bitterness (yay!). Let the eggplant sit for about fifteen minutes, which is about the time it takes my oven to reach 400 degrees.

When the oven reaches temp, thoroughly rinse off the eggplant, pat it dry, and coat it with some olive oil, salt, and pepper.

When 20 minutes is up, pull the eggplant out of the oven.

And spoon on a bit of your favorite marinara sauce – this is some really good jarred stuff.

Then sprinkle on some part-skim mozzarella cheese.

And then the secret ingredient….

… some seasoned bread crumbs. Just a small sprinkle (about ¼ teaspoon per slice) does the trick – it adds a little texture and crunch to the dish.

Now, just pop the eggplant back into the oven for 5-6 minutes until the cheese is melted and turning golden brown.

It is a memory of a wonderful volunteer experience (and a fitting dish to enjoy during Hunger Action Month).

So, kiddos, what have you been up to during the first four days of September? Anything fun? Let me know!

This recipe was featured in Perfect Eats on i’mperfect magazine, check it out here: http://im-perfectmagazine.com/eggplant-parmesan/ 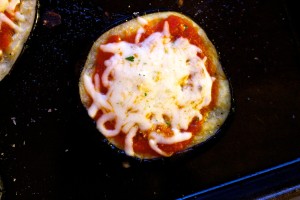