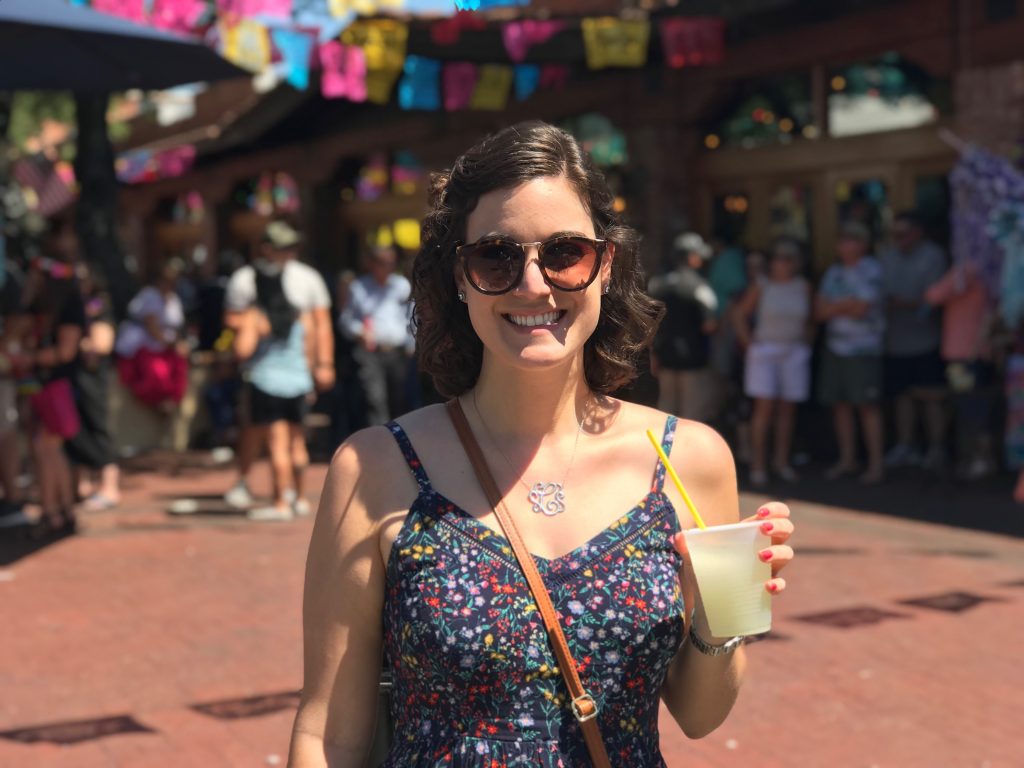 If you have been following along on the ‘gram, you know that I have just spent the past four days in the beautiful state of TEXAS! And guys, I am officially in love with the Lone Star State.

My sister and two good childhood friends road-tripped from Austin to San Antonio and stopped at a lot of fun places along the way! It was 96 hours full of friendship, laughs, and food – from our muffin misadventures prior to boarding the plane at 6AM to sharing a Twix bar as we waited to for the car to drive home.

And I couldn’t have asked for a better vacation!

Here’s a recap of all the amazing things we did (and ate!) during our wild Texas tour! 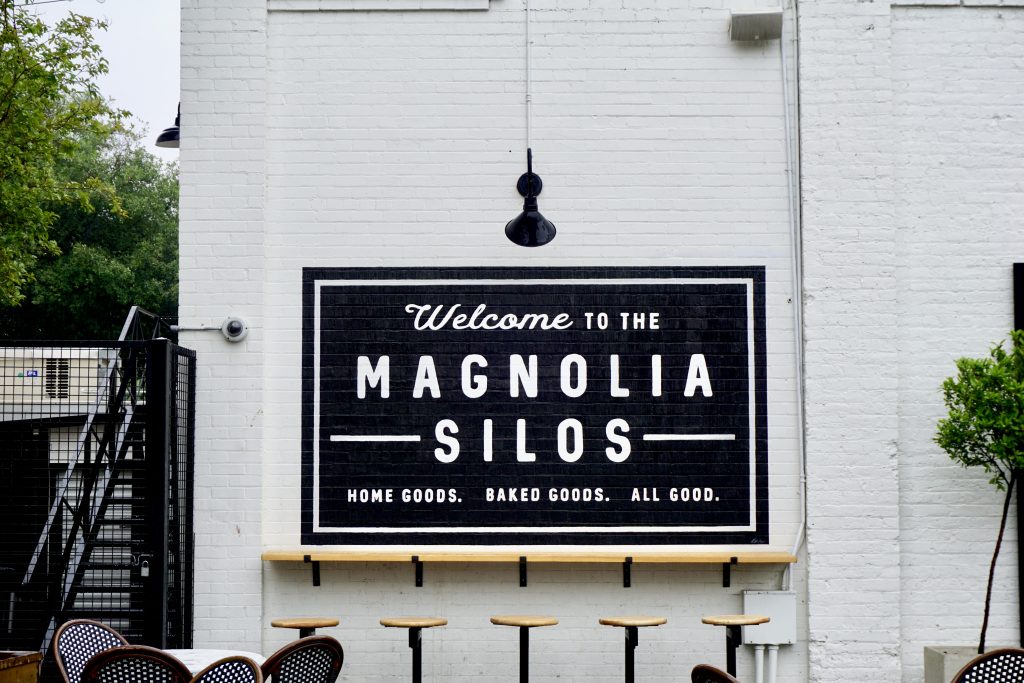 My sister is the biggest Fixer Upper fan EVER. When we decided on a TX road trip for our girls trip, she quietly asked if Waco could be a stop. With a little schedule arranging, we were able to make her dream a reality… and oh goodness, it was the best thing to watch. She was probably more excited than anyone else there and I was so happy to be there to witness it.

Since our timeline was extremely tight (due to having to get a new rental car due to a cracked windshield and the rainy weather), we decided to forgo Chip and Jo’s newest food venture, Magnolia Table, and stick to the food trucks at the Silos (their huge store/market/lifestyle epicenter). And that was the best decision we made on this trip. Despite the rain, there was still a fair amount of people visit the Silos… which meant that it took a bit for my sister to make her way through the shops and for us to get the treats we wanted for the Silos Bakery Co. 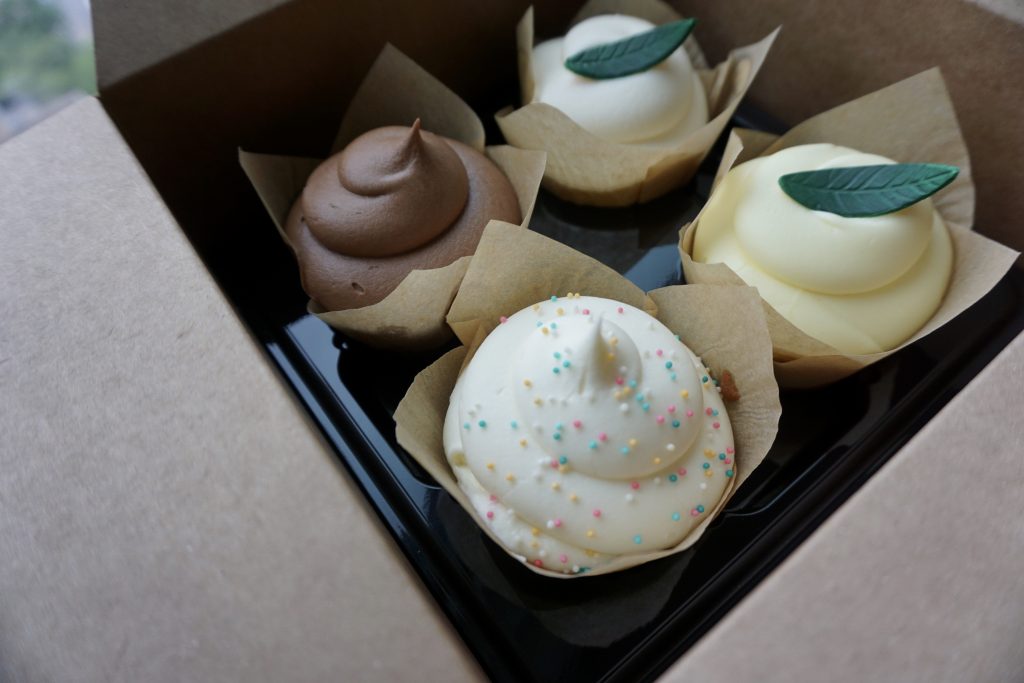 Having said that, the cupcakes we got (Lemon Lavender, Classic, The Chocolatier, and Joanne’s Birthday) were amazing and worth the wait! We had no time to sit and enjoy them at a table under the covered patio, so I kept them tucked in their sweet little box for later. While I was working my way through the huge line at the bakery (it was wrapped around the corner and down the side street!), my sister and one of my good friends were grabbing food from the food trucks. We met up to regroup and head back to the car, cupcakes, grilled cheese, mac and cheese, brisket, and popcorn in tow. While I drove back to Austin eating my brisket sandwich (smothered in caramelized onions), my sister and friend compared their grilled cheese masterpieces and decimated an order of mac and cheese.

While Waco was a super brief stop, it was a fun part of the trip… especially watching my sister’s face as she discovered each nook and cranny.

We flew into Austin and used it as our “home base” for the first day. After driving in from Waco, we headed to our hotel to meet up with our other friend who flew into Austin later in the day. She had befriended a bellhop in the hotel, who we asked for a good barbecue restaurant recommendation for dinner. Because I was not coming to Texas and missing out on traditional BBQ. He said that the best place to eat was Salt Lick BBQ – the Driftwood, TX location (and NOT the one on the highway). 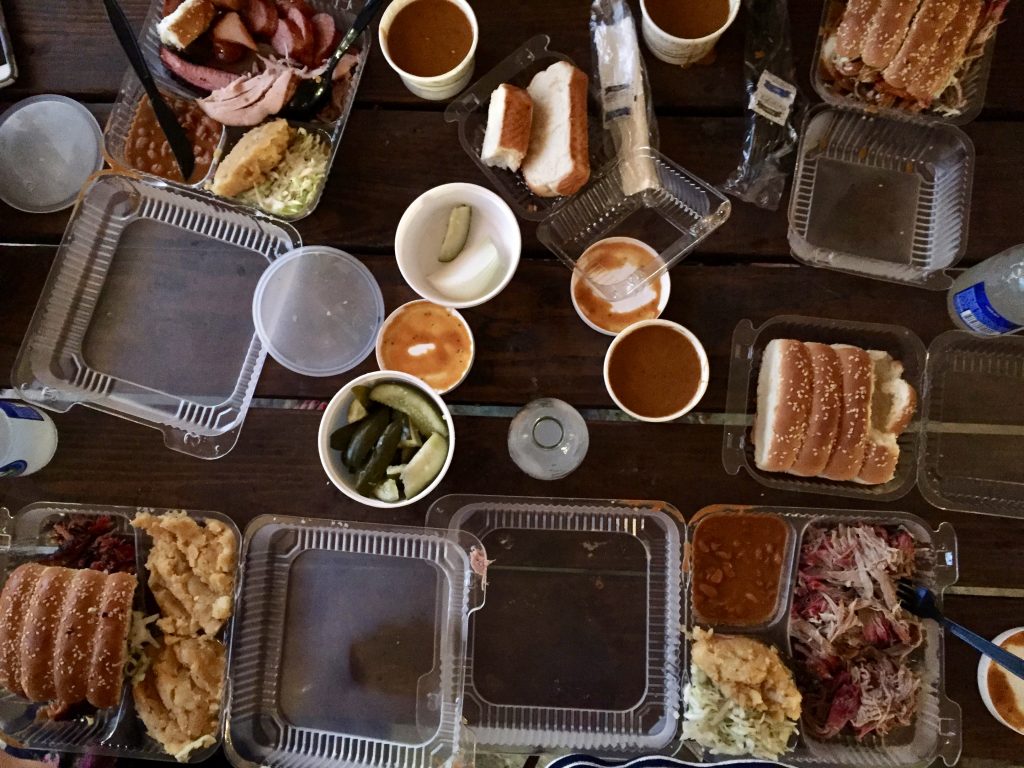 It was the most amazing BBQ I have ever eaten in my whole entire life (the picture does not do it justice).

This place is apparently famous for it’s HUGE open pit and the wait time for a table was about two hours. But, we found out they had a covered patio next to the take-out window… and the take-out window HAD NO WAIT. Two of us went off to grab some beverages from a liquor store (*note: Salt Lick is BYO and cash only*) and the other two laid claim to a picnic table. When we all reassembled (with our pre-mixed margaritas), we dug into piles of pulled pork, potato salad, coleslaw, soft white rolls, pickles, and homemade cobbler. While the pulled pork was probably the best thing I have ever eaten in my life, their potato salad was incredible. It was like mashed potatoes + pickling spice + vinaigrette. DIVINE. Plus, the setting was just as awesome as the food (eating right next to a winery? yes please!)

We rounded out our Austin food tour the next day with two breakfasts. We started out our morning with getting breakfast tacos at Jo’s Coffee – and they were awesome (did you know that Austin is the birthplace of the breakfast taco?). And then we headed to Gourdough’s Public House, where they specialize in donuts. My sister and I split a maple donut topped with spicy fried chicken (a play on chicken and waffles) and a donut smothered in chocolate sauce and brownie pieces (decadence on a plate). They were amazing and probably the coolest donuts I have ever seen. 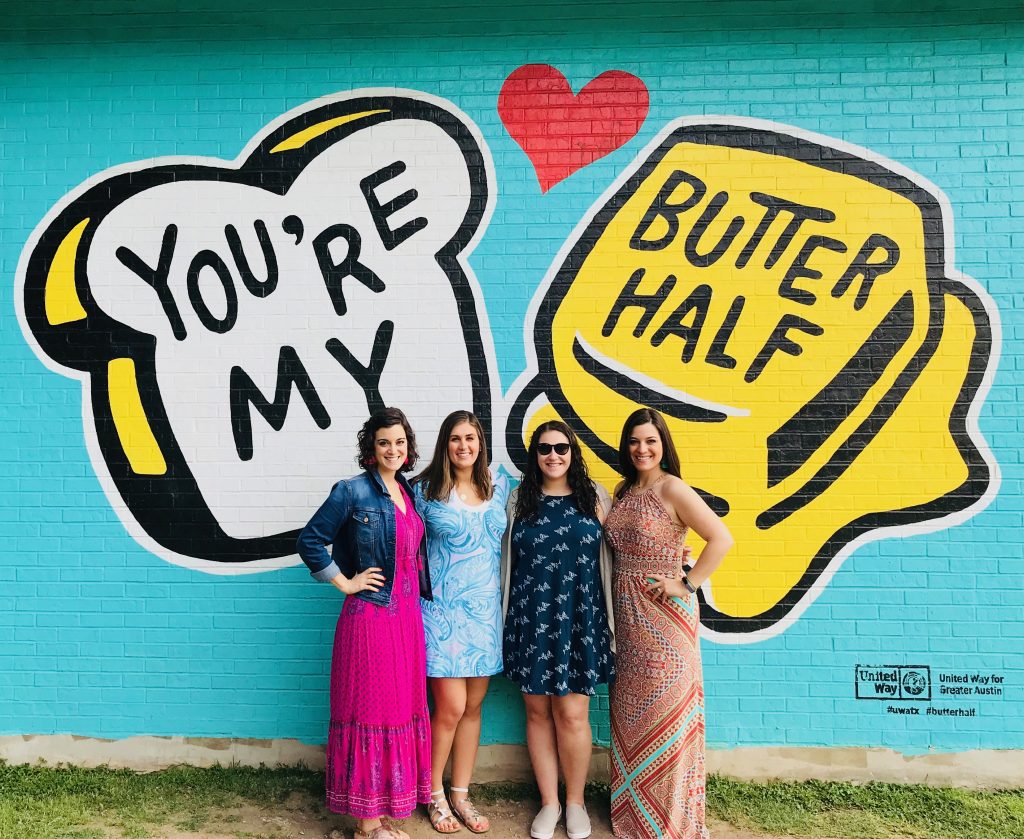 Before leaving the city, we walked around a bit to see all the famous Austin murals (and I love how one is food-themed!).

After filling up on donuts in Austin, I drove us out to Fredericksburg, TX (AKA the hill country). It is incredibly beautiful and a perfect quiet spot to rest, stroll, and relax after being up for 24 hours straight and then sleeping only 4.5 hours the night before. We went wine tasting, ate homemade ice cream and caramel corn, and then sat by the pool sipping on a bottle of wine + eating the last of our Magnolia goodies (who knew chardonnay + cinnamon rolls were a divine pairing?!?). We slept for 10 hours (!!) and woke up refreshed and ready to take on the day. 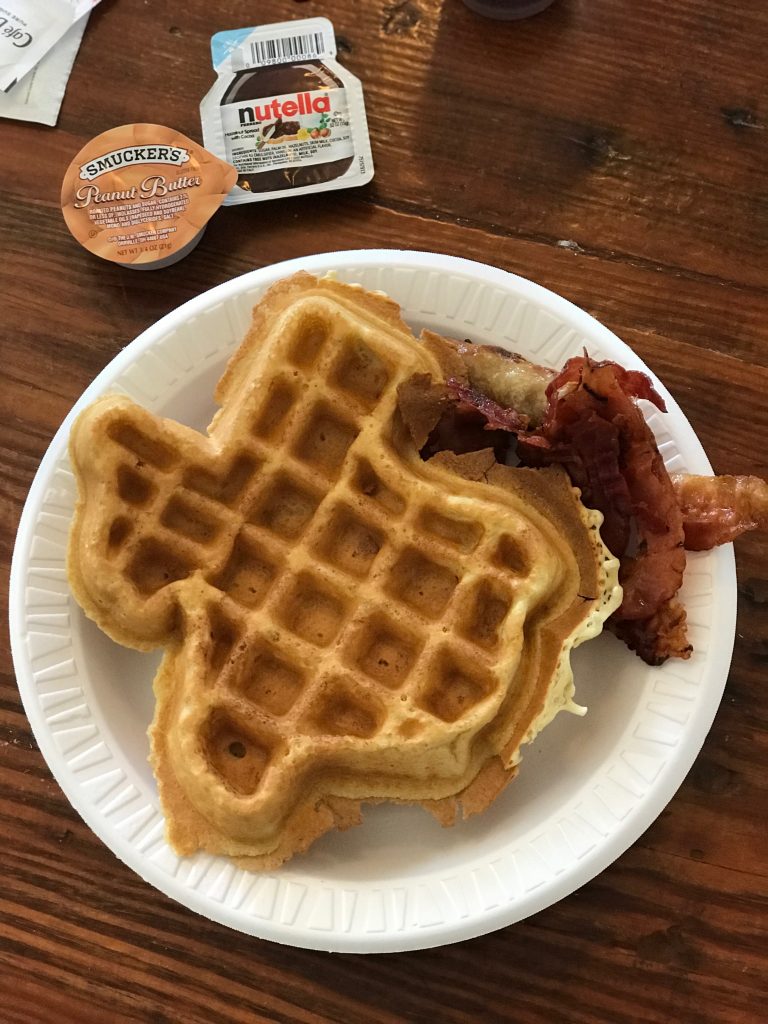 And nothing says “take on the day” than a breakfast the size of the Lone Star State itself. We were staying at the Fredericksburg Inn and Suites (I highly recommend them – the rooms were spacious and clean, the grounds were manicured, and it was a right off of the main drag of shops and restaurants). They also have a TEXAS-SHAPED WAFFLE IRON. Yep, you can eat a waffle the size and shape of TX. I smothered it in peanut butter and syrup and was the happiest person on the entire planet (because peanut butter + carbs = life).

This was a special leg of the trip, because San Antonio was celebrating Fiesta – a celebration in the honor of those who lost their lives in the battle at the Alamo. It is a full 10-day party, full of colorful headpieces, shows, parades, and events. We wandered around Market Square, which was in full Fiesta party-swing. We filled up on traditional Mexican flare at Mi Tierra (and I personally consumed a whole container of homemade tortillas) and then got a margarita to sip on as we strolled around the vendors. It was colorful, loud, and energetic!

Since it was Fiesta, we wanted to do something special for dinner. The Texas Cavalier River parade was held the night we were in San Antonio, so we decided to purchase dinner + show tickets at a riverfront restaurant. After eating more guacamole than I could hold, I settled next to my sister and friends right at the edge of the riverfront and watched illuminated floats sail down the river. It was a magical experience! 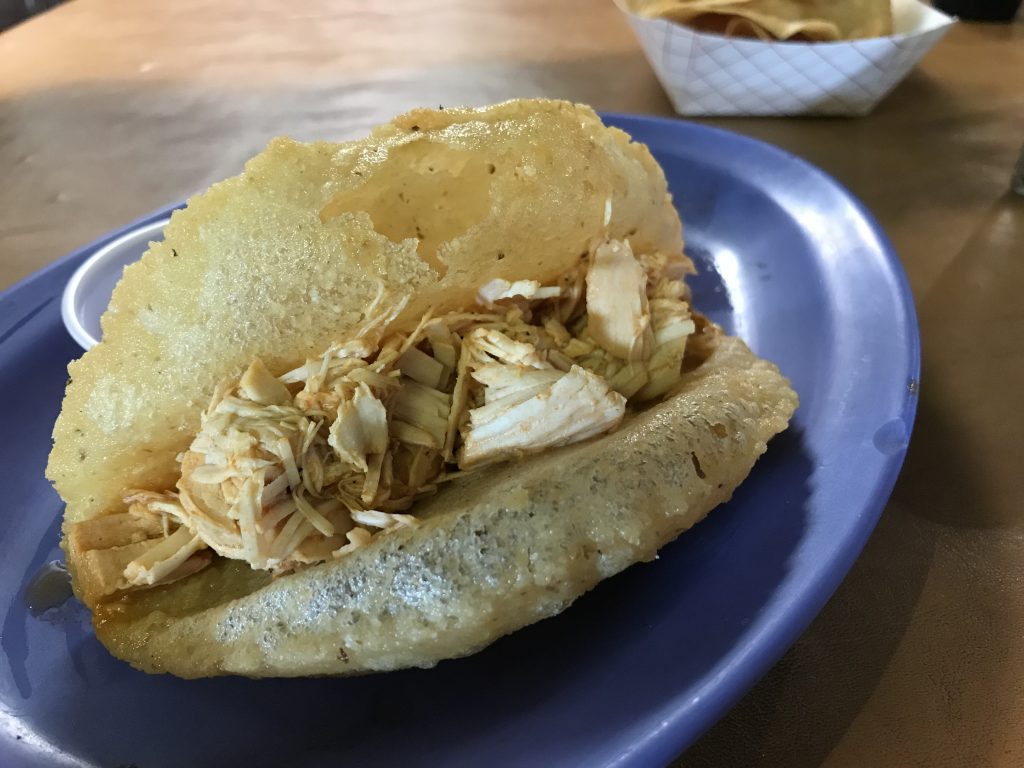 Our last day in San Antonio was also our last in Texas. After a long walk around the riverwalk and a quick boat tour, we grabbed the car and threw ourselves into the San Antonio Puffy Taco War. Two different restaurants state that they have the original puffy taco (a fried, puffed tortilla as the taco shell) – Henry’s and Ray’s. So we ate at both to see which was better! A fun way to wrap up our Texas trip!

What an amazing time in the Lone Star State! I can’t wait to go back and explore (and eat) some more!